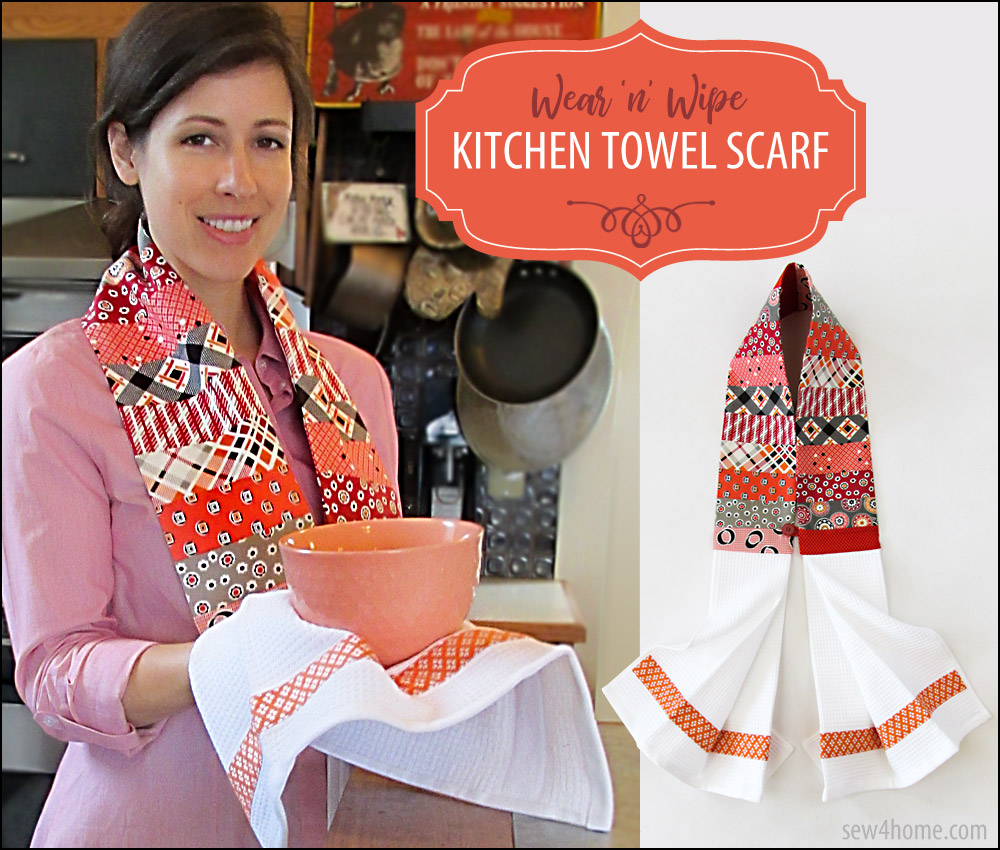 What happens when you combine the wearable feature of an apron with the wipe-able feature of a towel? You get our Wear ’n’ Wipe Kitchen Towel Scarf. It’s fabric on the top so you can loop it around your neck, but at the ends of that fabric loop are absorbent towels. No more soggy dish rag slung over your shoulder – these towels sit right at your waist, where you need them most. Wipe your hands, wipe the counter, even grab a warm pan or dish. We added an optional button at the center to keep the scarf more secure. As you move around the kitchen, never again be without a towel when you need it! 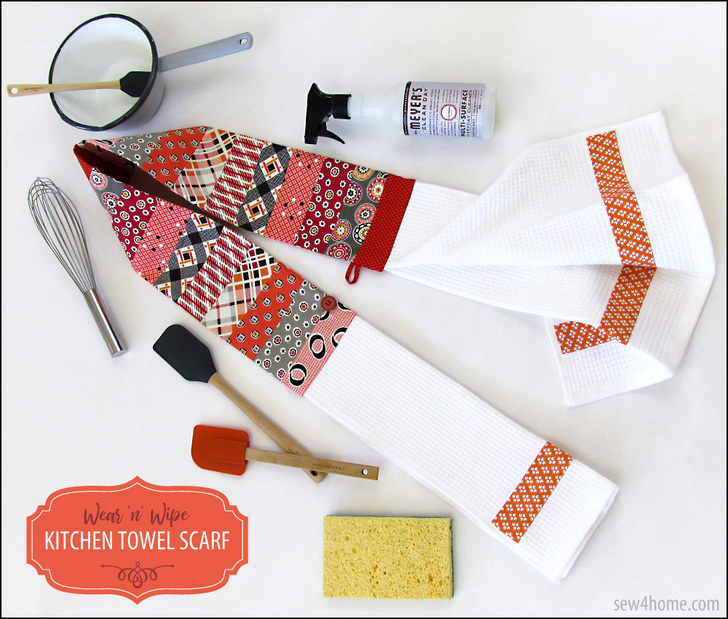 You may have seen similar items online or in-store. We received several requests on our You Asked 4 It list and so put one together with our own S4H spin.

Our fabric loop is created with a pretty patchwork of jelly roll strips. You can follow this plan or use a solid panel of fabric. Since we worked with quilting weight cotton, we added a layer of Pellon ShapeFlex® lightweight, woven interfacing. This flexible interfacing is optional, but we feel it gives the patchwork a crisper and better looking finish. 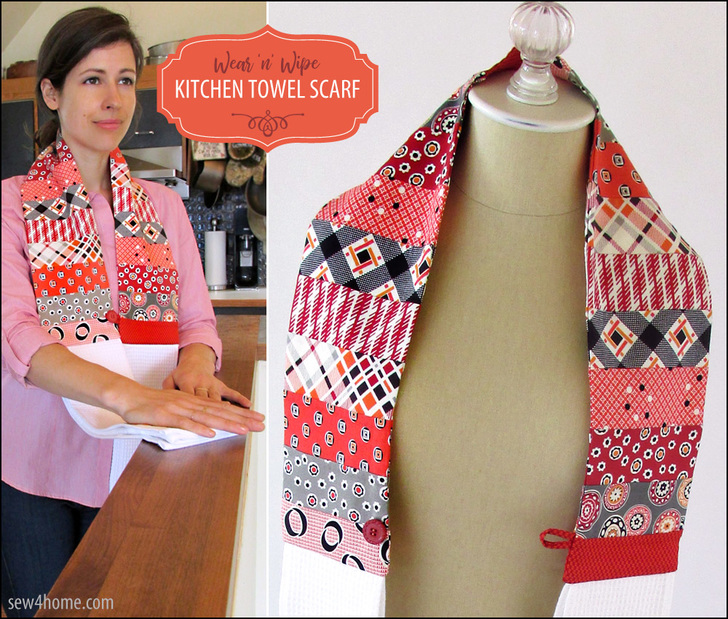 If you use jelly roll strips, you can double-up, cutting two each from 10 strips as we did. Or cut one each from 20 strips. In addition, you’ll need one 21” strip to cut in half for the towel accent bands.

When you’re planning the position of your strips, remember to vary not only color but also motif size and type. Bring in both geometric patterns as well as organic patterns. If you’d like to learn a few more basics about mixing and matching, check out our tutorial: Top 10 Designer Tips for Blending Colors and Prints. 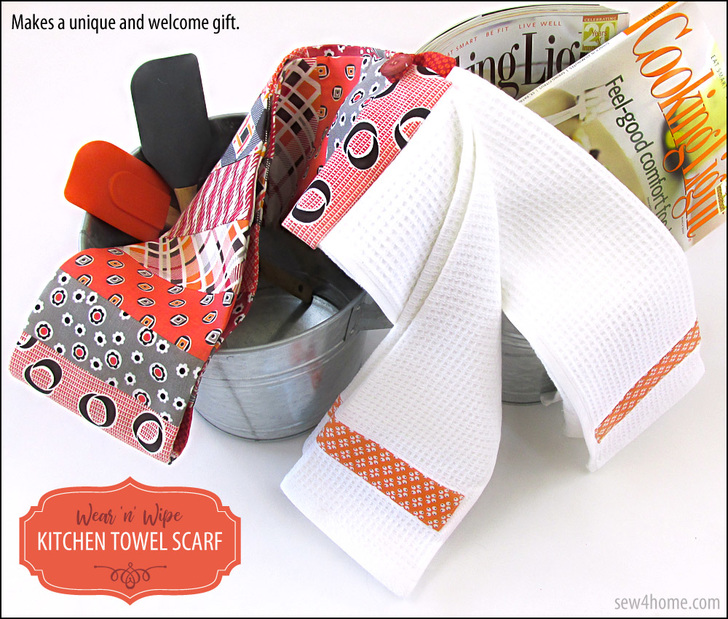 The Kitchen Towel Scarf is completely washable. If you’re working with pre-cuts and interfacing as we did, pre-washing is not critical, but if you go with a solid panel of fabric and/or forgo the interfacing, consider pre-washing the fabric as well as the towel. For more information, take a look at our tutorial on the What, Why, When and How of Pre-Shrinking and Pre-Washing.

Regarding the towel, we do recommend a store-bought option as then there’s no need for additional hemming. And, opt for a traditional kitchen towel weight; the thicker terry cloth that is more common for bath towels would be too bulky. Our towel was 20” wide x 30” tall, which was similar to many we found online and in-store. 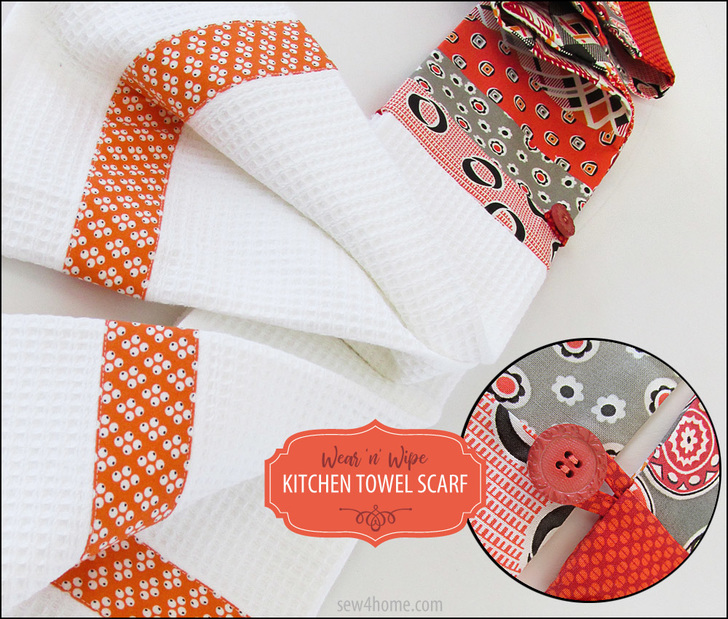 This would be a wonderful gift idea, perhaps adding in a matching apron and hot pad.

Our Kitchen Scarf finishes at approximately 5” x 66” with about 36” of that fabric and about 15” of towel on either end. Place the folded towel halves in position on the patchwork panel

Create and place the button loop

Fold and stitch to finish Hi Angie – good question that cut should be 11.5 x 19! Thanks for the heads-up – it’s been corrected above. This makes the best use of the 20″ width of most lightweight interfacings. As mentioned, this layer of interfacing is options, but does give a bit more crispness to the finish.

What would be the cut measure if I decide not to use the jelly roll strips?

This is a great idea. It seems, when I cook, I am constantly washing my hands and looking for the towel to dry them. Not any more…❤️

Do you have a written pattern that I could purchase? These are so cute and somethings I could give as gifts.

Hi Mary – All the steps you need are right here on the project page. And, if you look to the left, you’ll spot a SHARE bar with options to print or save as a PDF and then print. Here’s a link to our overview article on working our our free PDF patterns:
https://sew4home.com/how-use-sew4home-pdfs-articles-patterns/

Does anyone have a cute tag created for these? I made them for my co-workers but I can’t seem to find a cute tag idea.

Hi Shelby – These make such great gifts. We didn’t create a tag, but there are so many out there to choose from – especially on Etsy. If your machine has a monogramming function, sometimes you can program words to stitch out on twill tape or similar… something like, “Wipe Away Your Cares” would be cute. I’m sure your co-workers will love such a thoughtful gift.

I was looking for a free tag also

Hi Sandra – I’m sure you could make a lovely tag. We did so some simple gift tags for the project below:
https://sew4home.com/scrapbusters-wallet-style-gift-card-case-with-double-vinyl-pockets/

This is great!  I think I’ll

This is great!  I think I’ll modify mine to make it a tad less wide around the neck.  Wonderful for gifts.  Thanks

I was thinking the same thing since it looks rather bulky in the neck area!

I love this!  I’m always

I love this!  I’m always looking for Christmas gifts to make for my colleagues at work.  This year it was your wonderful soup cozies and they were a hit!  Next year, I think I’ll make these beauties and I’ve got a whole year to make them up!

@Nancy -Wow — you are WAY ahead the game. Have fun, and be sure to let us know how yours turn out. If you follow up on social media, we’d love to see a picture. We are sew4home on Facebook, Twitter, and Pinterest, and sew4home_diy on Instagram.

Thank You so much for the

Thank You so much for the tutorial. I also put a machine embrodiery design on my towel “Bakers gonna bake”. It made up very nicely!

@Belinda – what a fun

@Belinda – what a fun embellishment idea !

I love this idea.   So much

I love this idea.   So much easier than tossing the dish towel over your shoulder.

@cl2clark – Thank you! Let us know if you give it a go

What a great idea! This is

What a great idea! This is not only pratical but looks good too. I am always looking for a place to wipe my hands but always seem to be too far away from the hand towel hanging on the cabinet door. By the time I get to it, I have dripped on the floor. This is right where you need a towel and the button and loop will keep it there. I love it!

@Karen – Thank you so much! I so know what you mean about the towel always being at the exact opposite site of the kitchen from where you need it

What a great and practical

What a great and practical idea! I always seem to hang the towel itself around my neck but this is better and CUTER! Thanks!

@Suzanne – You’re welcome! A towel over the shoulder is SO common, but can also be rather dirty and/or soggy

– This is a fun alternative.

Love the color choices. The

Love the color choices. The best functional apron I have ever seen had a large ring that held a hand towel on it.

@Jane – Thank you. We’ve done several aprons with a built-in towel loop at the waist, but we thought this was such a clever alternative.