We’re excited to debut our new Sew4Home series: Vintage Rescue, a category of inspiring ways to recycle, re-use or redesign something old to create a great new look and perhaps salvage something meaningful. For our first article, I thought I’d start with a personal story. It involves my always-a-challenge-to-buy-for sister’s impending birthday, cleaning the attic to move, and a much-loved and almost-lost rosebud chenille bedspread.

We’re excited to debut our new Sew4Home series: Vintage Rescue, a category of inspiring ways to recycle, re-use or redesign something old to create a great new look and perhaps salvage something meaningful. For our first article, I thought I’d start with a personal story. It involves my always-a-challenge-to-buy-for sister’s impending birthday, cleaning the attic to move, and a much-loved and almost-lost rosebud chenille bedspread.

Certain items leave an indelible mark on your childhood memory banks: a special blanket, a tattered teddy bear, a chipped cup with the faded picture of a kitten. For my big sister, one of her treasures was a beautiful white chenille bedspread sprinkled with a field of delicate rosebuds. As long as I can remember, that bedspread was the focal point of her room. I’ve gotten past my jealousy over that room … mostly. A room that featured a graceful white canopy bed with matching dresser and night stands. Yeah, right.

So, imagine my surprise, when I came across the bedspread while cleaning out my attic for an impending move. It was August, and dang hot up there, so at first I thought it might be a mirage. But no, it was the bedspread alright, stuffed into a cardboard box in a back corner. It was seriously dirty, torn in several places, worn in several more, a mere shadow of its former self. Chances are it was used to wrap up something precious years earlier when I’d moved out on my own, and then had bummed around with me through the years until it ended up covered with cobwebs in a hot, dusty attic box. I was about to toss it into the “things to throw away” pile, when I held it up and noticed there were several places that still looked okay.

“Hmmmmm,” I said to myself, because no one else was crazy enough to be up in that hot attic with me. “I wonder if I could make something out the parts of the fabric that are still in good shape?” “Pillows,” I answered. “I could make her some cool pillows for her birthday.” Then, I headed downstairs with the bedspread, and to get a glass of ice water, because if I was starting to carry on conversations with myself, could heat stroke be far behind?

I washed and dried the spread in hot water with a touch of bleach. It came out fluffy and white. I then laid it out flat on the floor to take stock of which areas could be salvaged. Not only were there lots of holes and tears, there were also places where the chenille had been worn smooth. But there were some fairly large chunks of cloth that were perfectly fine. I picked out the pillow shapes I wanted to make: two round and one square “envelope” style and cut out paper patterns. I then placed the patterns on the best parts of the fabric, moving them around until I had a front and back for each shape. The rosebuds ran in very distinct lines, so I had to be careful to keep the lines parallel when I cut out the pattern pieces.

Since chenille itself is a classic look, I thought a classic pillow design was fitting. I chose color coordinated cording for the round pillows with a contrasting covered button in a soft pink flannel. The envelope style pillow features a row of playful pom poms along the lapped edge.

My sister LOVES her rosebud pillows, and so does her rescued kitty, Chloe (seen above). They hold a place of honor on her current bedspread. She says they make her smile every time she looks at them. That’s the great thing about a Vintage Rescue project. “Found Fabric” could be hiding in the most unlikely spot just waiting to be turned into something memorable: 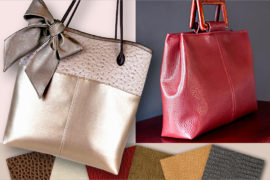